Download the Prevalence of Adolescent Substance Use and Misuse Research Update.

Adolescent substance use and misuse are serious issues that contribute to significant medical, psychological, and legal consequences later in life. While it can be difficult to prevent and treat substance misuse among adolescents, scientists have discovered a number of strategies that are effective among this high-risk population.

In 2015, nearly half (48.9%) of U.S. high school seniors admitted to using an illicit drug (not counting alcohol or tobacco) in their lifetime.1 For many years, the illicit drug most commonly used by adolescents has been marijuana, and its rates of use among adolescents have increased significantly since 1991.2 Underage consumption of alcohol and tobacco also poses a significant health risk to adolescents. Within the past year, 21% of eighth grade students reported that they had consumed alcohol, and 8% reported that they had been intoxicated; these numbers skyrocket to 58% and 38%, respectively, for twelfth grade students.1 While cigarette smoking has steadily declined across all ages since 2010, e-cigarettes have become more popular than any other tobacco product, and those who use them cite experimentation and "because they taste good" as the most important reasons why they began or continue to use them.1

In addition to having high rates of use for various substances, adolescents have demonstrated a trend of minimizing how harmful drugs can be. Between 2014 and 2015, the perceived harmfulness of regularly smoking marijuana dropped significantly from 36.1% of high school seniors rating it as a "great risk" to 31.9%. This decline is a continuation of a 10-year trend of decreasing perceived risk (in 2005, 58% of high school seniors rated regular marijuana use as a "great risk").1

Substance use disorder rates among adolescents can be less straightforward than use statistics, as diagnostic criteria and differences in shared nomenclature can make large scale tracking of diagnoses difficult, especially since adolescents are often diagnosed using dependence and problematic use criteria developed for an adult population.2 Adolescents between the ages of 12 and 17 demonstrate alcohol use disorders (AUDs) and drug use disorders (DUDs) in fairly similar past-year prevalence rates, and the overall prevalence of these disorders has decreased slightly since 2002, from approximately 6% to approximately 3%.2 Adolescents and young adults 18–25 demonstrate much higher rates of AUDs than DUDs, although the rate of AUD prevalence has decreased since 2002, from approximately 18% to just over 12% (DUDs remained somewhat consistent, hovering between 6% and 8%).2 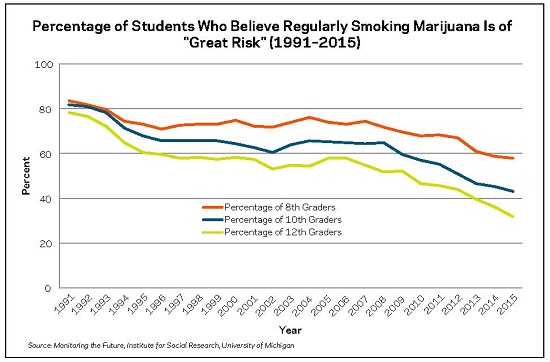 The importance of evidence-based treatment methods rings as true for adolescents as it does for adults; however, adolescents seeking treatment for substance misuse or dependence often present unique issues that require special attention. For example, comorbidity (the presence of substance use disorders alongside one or more mental health disorders) is quite high among adolescents in treatment; a 2001 study found that 40.8% of adolescents in a public mental health treatment program also met criteria for a substance use disorder.3 Treatment interventions that address substance use as well as mental health issues are ideal for this population. Reviewers have determined that individual cognitive-behavioral therapy (CBT), motivational enhancement therapy (MET), multidimensional family therapy (MDFT), functional family therapy (FFT), and Cognitive Behavioral Therapy Group (CBTG) have "well-established efficacy" among adolescent patient populations.4, 5 The American Academy of Pediatrics also recommends that adolescent treatment outcomes could be improved by incorporating adapted versions of evidence-based treatments into nonclinical settings, such as schools and youth activities, in order to maintain positive attitudes and behaviors related to substance use and provide lower-intensity interventions for adolescents with substance use behaviors that do not necessarily warrant formal clinical care.6

Preventing drug and alcohol use and misuse among adolescents begins with setting a strong foundation in earlier stages of childhood development. Social norms, or the perceptions and expectations adolescents have regarding the behavior of others, play a significant role in whether adolescents consume alcohol or drugs (for more information on this phenomenon, see the Research Update issue on "The Social Norms Approach to Student Substance Abuse Prevention").7 Adolescents who have high levels of positive parental involvement in their lives (through school involvement or other healthy involvement) are less likely to report substance misuse in adolescence.8 Similarly, children and adolescents whose parents consistently set clear expectations about not using alcohol or other drugs were less likely to engage in dangerous drinking behavior as young adults.9 Best practices also encourage parents and other role models to often point out that many adolescents choose not to drink or use drugs, despite the perception that "everyone is doing it."7 School- based programs that globally promote healthy habits among disadvantaged children and their parents (including increased healthy parental involvement and expectations) have consistently demonstrated success in increasing positive, healthy behavior among adolescents and young adults, including reduced substance use and misuse.8, 10, 11

40.8% of adolescents in a public mental health treatment program also met criteria for a substance use disorder

Hazelden Betty Ford offers a wide variety of services for adolescents, including sites and programs dedicated specifically to adolescent patients. Our Hazelden Betty Ford in Plymouth, Minnesota, treatment site caters to patients between the ages of 14 and 25. We offer residential and outpatient programs and services that utilize evidence-based practices that have demonstrated effectiveness in adolescent populations. Hazelden Betty Ford also offers programs for parents and siblings that provide education and support for the loved ones of adolescents who have been affected by addiction to drugs and alcohol.

Question: Isn't it better for parents to have relaxed attitudes about drug and alcohol use so children can come to them to talk about their use, or so they drink at home in a safe environment instead of somewhere else?

Response: While many parents believe it is safer to allow their teenagers to drink at home, or to promote a relaxed attitude about drug and alcohol use to avoid children from "sneaking around," it can actually be much more harmful in the long run. Parental expectations over a child's development set the stage for perceived social norms that adolescents and young adults use to determine whether certain behaviors are acceptable.8 These norms play a major role in predicting whether adolescents and young adults will engage in risky or unhealthy drinking and drug use behavior later on in life.9

Parents: Take an active role in educating your children about the dangers of substance misuse and have frequent conversations about what they are doing and with whom they are spending time. Establish a clear expectation in your home early on in your child's life that drinking and drug use are not acceptable and talk to your kids about perceived social norms versus actual social norms among their peers.

Health Care Providers: All routine medical checkups for children and adolescents should include a screening test for substance use. Regular medical visits provide an excellent (and underutilized) opportunity for screening and brief intervention with adolescents engaging in hazardous use. Many brief screening tools have been developed and evaluated for use within an adolescent population.