Alcohol is a major contributor to mortality and morbidity in the United States. An estimated 88,000 people die each year from alcohol-related causes (Stahre, Roeber, Kanny, Brewer, & Zhang, 2014), making it the fourth-leading cause of preventable death (Mokdad, Marks, Stroup, & Gerberding, 2004). A recent analysis of national data showed that alcohol-related emergency department (ED) visits are increasing at a faster rate than overall ED visits, placing a huge burden on our already stressed health care system. Currently there are nearly 4 million alcohol-related ED visits per year in the United States, representing a significant increase since 2001 (Mullins, Mazer-Amirshahi, & Pines, 2017). Binge drinking—namely, consuming four or more drinks for females and five or more for males in one sitting—has been the focus of numerous studies during the past few decades, and the negative impact of binge drinking on individual health, safety and well-being is clearly understood. But the finding that a substantial proportion of young adults are engaging in levels of alcohol consumption beyond the “binge” threshold (or “high-intensity drinking”) is sparking new concerns among public health professionals.

Figure 1. Prevalence of high-intensity drinking (10+ drinks on one occasion during the past two weeks), among college students (Johnston, O'Malley, Bachman, Schulenberg, & Miech, 2016) 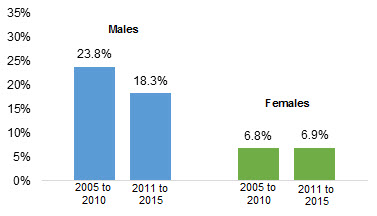 Similar trends are observed among high school students as well. National data from 1991 to 2015 showed that more than half of high school drinkers binge drank, and 44 percent of binge drinkers consumed eight or more drinks in a row (Esser, Clayton, Demissie, Kanny, & Brewer, 2017).

“It is these high-intensity drinkers who reach dangerously high blood alcohol levels and are at the greatest risk for both acute and long-term consequences,” added Patrick.

Dr. Aaron White (2017) suspects that high-intensity drinking might be behind the rise in alcohol-related hospitalizations and deaths among young adults during the past few decades.

Excessive Drinking Goes Hand in Hand With Other Drug Use, Including Marijuana

Decades of research studies support the notion that polysubstance use is the norm rather than the exception. For example, among a sample of 1,776 college undergraduates, Keith et al. (2015) found that students who use marijuana are much more likely to binge drink frequently than students who do not use marijuana. Excessive drinking behavior is associated with a higher risk for smoking cigarettes and using other illicit drugs as well (Keith et al., 2015; Substance Abuse and Mental Health Services Administration, 2014).

Identifying and intervening with young people who engage in either binge drinking or high-intensity drinking is important because of the many acute and long-term health consequences of heavy alcohol consumption. The 2015-2020 Dietary Guidelines for Americans recommends that alcohol be consumed in moderation—up to one drink a day for women compared with two a day for men (U.S. Department of Health and Human Services and U.S. Department of Agriculture, 2015). Not only are individuals who drink alcohol at levels exceeding these guidelines at risk for health and safety issues, but they might also experience problems academically, professionally and personally. Of note is a new study showing associations between high blood alcohol concentration and acute cardiovascular events, including having an irregular heartbeat (Brunner et al., in press).

Although early intervention can help set a young person back on track and reduce the risk for chronic problems, only 18 percent of binge drinkers are asked about alcohol use by their physician and advised to reduce their consumption (McKnight-Eily et al., 2017). More and earlier intervention is needed, said Dr. Amelia Arria, associate professor and director of the Center on Young Adult Health and Development at the University of Maryland School of Public Health.

“Regularly asking about alcohol consumption patterns to detect individuals at risk for problematic consumption should be common practice for physicians and other health care professionals who manage the care of young adults,” Arria said. “Early intervention to address problematic drinking trajectories is essential to mitigate possible health-related consequences.”

“This research is another reminder that alcohol—as our most accessible and culturally acceptable drug—is the one that most often triggers problems in people who are susceptible to substance misuse, addiction, and other related health issues.”

“We are seeing more problems with college-educated women in particular, who are now drinking far more, and with greater consequence, than in previous generations.”

“Thousands of college students at low risk for developing alcohol use disorders still suffer from the ramifications of excessive drinking—from DUIs, car crashes, and violence, to date rape. Millions more are affected by the collateral damage.”

“Some people who drink to the extreme might also gravitate toward other risks, such as using other mood-altering substances.”

“People in high-risk populations, who often drink excessively in combination with other substance use, will likely develop severe alcohol use disorder and experience a host of other tragic consequences. Unfortunately, these high-risk individuals are rarely identified and helped, until it’s too late. Instead, they remain hidden in a popular culture that has both normalized problem drinking and failed to let go of the delusional thinking that everyone reacts to alcohol in the same way.”

“Amid our country’s devastating opioid epidemic and heated debates over marijuana policy, it’s important to remember that alcohol remains America’s most pervasive drug and the one most harmful to public health and the economy. It contributes to almost 90,000 deaths annually and costs the country a quarter of a trillion dollars per year in medical and public safety expenses, and lost productivity.”

“Unfortunately, alcohol is ubiquitous in American culture, celebrated more than discouraged. We must address the culture by creating policies, communities, and environments that discourage drinking more and promote it less. We feel the policies and practices that have reduced tobacco use by more than 50 percent in the past 50 years offer some guidance on effective approaches.”