Why Do People Use Alcohol & Drugs Even After Facing Consequences?

Why do people continue to use alcohol and other drugs chronically even after experiencing serious medical, social, legal, or financial consequences? This is a question that has interested professionals in a wide variety of addiction-related fields for many years. Advances in neuroscience and biology have allowed scientists to better understand the physical roots of substance use and dependence, which has led to the contemporary disease model of addiction. By studying and understanding the biological characteristics of substance dependence, scientists and physicians are able to develop medical and pharmacological treatments that can significantly improve recovery outcomes.

Basics of Brain Function and Neurotransmitters

In order to carry out all of its necessary functions, from making sure your lungs are breathing to working out a calculus algorithm, the brain uses a complex communication system made up of tree-like cells called neurons. Neurons send electrical signals through your brain and the rest of your nervous system in order to manage everything that happens in the body. These electrical signals are controlled by chemicals called neurotransmitters, which are secreted from within the neurons and sent out in the brain to other surrounding neurons in order to activate (or deactivate) them. Neurons absorb these neurotransmitters through receptors. Each neurotransmitter is like a key, and it fits into its own specific receptor, which acts like a lock. In order to maintain balance, the brain is able to change these receptor "locks" to fit other neurotransmitters when there is too much, or not enough, of a certain neurotransmitter in the system. While there are many different kinds of neurotransmitters, each neuron is only designed to produce one or two specific types. Generally, neurons are grouped together based on the neurotransmitters they produce and receive, which is why specific areas of the brain regulate certain functions.1

The Brain Following Initial and Early Substance Use 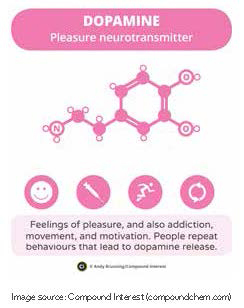 The early draw of drug use for most people is the pleasurable feeling they get while "high," 2 a feeling that results from electric stimulation of specific areas of the brain that make up what is collectively called the brain's "reward center": the ventral tegmental area (VTA), nucleus accumbens (NAc), and substantia nigra (SN), all of which are located near the front of the brain.3,4 The neurotransmitter that "unlocks" the electrical stimulation of these areas is dopamine—a neurotransmitter that is strongly associated with feelings of pleasure and reward.4 The biological purpose for this mechanism is to encourage life-sustaining behaviors (such as eating when hungry) by producing a pleasurable sensation when the necessary behavior happens. Alcohol and other mood-altering drugs, however, artificially create this effect and do so more efficiently and intensely than natural rewards.5,6 Research has shown that the drugs most commonly abused by humans (including opiates, alcohol, nicotine, amphetamines, and cocaine) create a neurochemical reaction that significantly increases the amount of dopamine that is released by neurons in the brain's reward center.7 The result of this dopamine overflow is the feeling of being high.

While the intense feelings of pleasure and reward derived from early drug use can play a substantial part in continued use of the drug, it is only a small part of the neurophysiological cycle of addiction. Learning has long been understood to be tied to the administration of rewards and punishments, and the intense reward sensation of drug intoxication creates a strong and rapid learning response in the brain, associating drug use with feelings of pleasure.5 This association leads to higher and more frequent drug administration in order to experience the pleasure of the reward response more often.5 Additionally, the intensified dopamine response in the brain that mood-altering drugs produce does not naturally stop once the behavior is initiated or completed (as is the case with natural reward behaviors such as eating or having sex); as a result, cravings for the rewards associated with the drug continue to occur, even during drug use, which leads to compulsive, repetitive use.5 Continued, long-term use also results in the brain reducing the number of dopamine receptors in the brain to adjust for the increased dopamine in the system.8 This reduction in dopamine receptors has a two-fold impact on addiction. First, reduced dopamine receptors in the SN are associated with impulsive behavior that has been tied in lab studies to escalating and compulsive self-administration of drugs.4 Reduced dopamine receptors also result in a state known as "anhedonia", or a loss of pleasure in activities that were once enjoyed. The depressive feelings of anhedonia can drive a user to administer drugs in a reactive attempt to feel pleasure again, especially in a state of low self-control.9,10 Self-control is further reduced as the toxic effects of long-term drug use begin to erode grey matter in the prefrontal cortex, reducing users' ability to rationally consider consequences as a result of reduced executive function and also reducing the prefrontal cortex's role in regulating the brain's reward system.11

Increased understanding of the function and mechanisms of the brain's reward system, particularly dopamine and its receptors, has led to several innovations related to medical treatment of addiction and cravings. Some clinicians now use dopamine agonists and antagonists. These substances act like "skeleton keys" by fitting into the receptors meant for dopamine and either initiating the same response that the dopamine would have (agonist) or shutting down the response that dopamine would have initiated (antagonist).1 Dopamine agonist or partial agonist medications have been developed with the intention of mimicking increased dopamine in the brain, while trying to control the amount of dopamine release and reduce the intensity of the pleasurable response in order to minimize cravings and extinguish the learning association.12 An early dopamine agonist was methadone, but, more recently, the partial agonist buprenorphine has been used to effectively treat opioid dependence.12 Naloxone is a common antagonist, but its low treatment adherence rates (since it blocks the pleasurable stimulation in the reward center) generally result in it being administered alongside an agonist or partial agonist, like buprenorphine.12 In addition to agonist and antagonist therapies, medications related to prefrontal cortex functioning have shown promise—for example, modafinil, while not related to dopamine, reduces drug cravings in dependent patients by reducing impulsivity and allowing natural inhibitory cognitive processes to occur.12

The intense reward sensation of drug intoxication creates a strong and rapid learning response in the brain, associating drug use with feelings of pleasure

Treatment at each of the Hazelden Betty Ford Foundation sites is constantly guided and improved by scientific innovation. As a result, our treatment plans incorporate pharmacological treatments with traditional counseling sessions for patients with high-risk dependence behaviors. Our recently launched COR-12® program offers opioid dependent patients Twelve Step-based treatment paired with cognitive-behavioral therapy, motivational interviewing, and opioid agonist and antagonist medications that help control cravings by gradually reducing the amount of dopamine in the system.

Do the brain's dopamine levels and reward center ever return to normal after drug use stops?
Recently, scientists have discovered that after long periods of abstinence from alcohol and other drugs, the brain's physiology does begin to return to normal. By maintaining lower dopamine levels in the brain, dopamine receptors can start returning to higher, normal levels. Increasing the number of dopamine receptors to normal levels reduces impulsivity and anhedonia symptoms. Additionally, abstinence from drugs and alcohol for a year or longer has been shown to allow the brain to begin repairing structural damage caused by drug toxicity, which in turn improves cognitive function and allows chemically dependent patients to exert stronger self-control.

For Family Members: While the consequences of longterm substance abuse alone may seem dire enough to convince your loved one to stop using, it is important to remember that the chemically dependent person's reasoning and decision-making are impaired by the physical effects of drug use. If you know someone who is unable to stop using despite clear negative consequences, it is important to encourage him or her to seek medical help because substance abusers may benefit from taking prescription medication to control the physiological symptoms of their dependence.