National surveys have estimated that 2%–11% of Americans self-identify as LGBTQ,1 yet as a population, these individuals have historically been underrepresented in addiction research. As scientists have worked over the past three decades to remediate this gap, substance use characteristics and treatment factors present among the LGBTQ population have begun to emerge.

Substance Abuse and Dependence Among the LGBTQ Population

In order to better understand the increased prevalence for substance abuse and dependence in the LGBTQ community, scientists have made attempts to identify common characteristics of LGBTQ individuals who report problematic substance use or seek treatment for substance use disorders. Many studies have found that LGBTQ individuals often face significantly increased trauma as a result of various internal and external factors.8 When compared with heterosexual and cisgender individuals, LGBTQ individuals have been found to suffer significantly higher incidences of stressful childhood experiences,9 school victimization,10 neighborhood-level hate crimes,11 and family conflict within the previous 30 days;7 each of these stressors has been found to correlate significantly with increased substance abuse.9, 10, 11 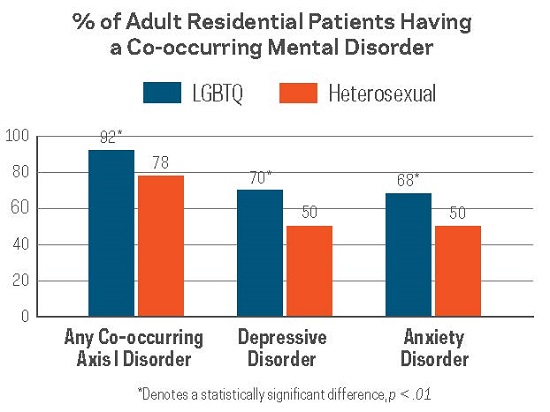 Comparisons of treatment-seeking rates between LGBTQ and non-LGBTQ individuals have determined that LGBTQ individuals seek treatment for substance abuse and mental health disorders at a significantly higher rate than heterosexual individuals.13 Despite this, there are surprisingly few programs specifically geared toward treating LGBTQ patients. Studies have found that a significant number of counselors in substance abuse treatment programs endorse negative attitudes toward LGBT clients,14 while others simply fail to consider the unique needs of this population; these factors can have a significant negative impact on treatment effectiveness and have encouraged many providers to develop LGBTQ-specific services.15 Unfortunately, finding such services may be more difficult than treatment seekers first assume. A 2007 study of substance abuse programs throughout the United States and Puerto Rico found that, of the 854 programs that reported via national survey to have specialized treatment services for LGBT individuals, only 62 programs (7.3%) confirmed during telephone follow-ups that such services actually existed.17

Despite a growing trend of research studies investigating treatment factors for the LGBTQ population, there are virtually no reports on recovery outcomes following treatment for LGBTQ individuals or how their outcomes compare to heterosexual patients. Many early studies have been criticized for problematic research design;17, 18 however, more recent studies have used large-scale population data to more accurately assess substance abuse outcomes among patients who self-identify as members of the LGBTQ community.18 A 2012 study using National Treatment Improvement Evaluation Study (NTIES) data suggested that there are no significant differences in outcomes for LGBTQ patients who utilize substance abuse treatment programs as compared to heterosexual patients.18 While replication from additional studies is badly needed, these findings underlie the importance of seeking treatment even when a specialized LGBTQ program is unavailable. Given the relatively recent development of specialized LGBTQ treatment settings, outcomes specific to these culturally competent programs, and how they compare to traditional programs, are not readily available.

Scientists have reported higher rates of substance use among sexual minorities